MERITUS.GP is a championship-winning International motorsport team. Based in Asia for the last 25 years and owned by a Malaysian company, the team’s passion is creating international motorsport heroes. Before expanding to Asia in 1995, MERITUS manufactured the first ever Irish sports car, the TMC Costin, and created a winning European heritage. The team now hold 36 FIA Asian titles, winning at every level of the sport under Formula 1 (F4, F3, F2).

Since winning their first Asian championship in 1996 with Narain Karthikeyan – who went on to become India’s first F1 driver – MERITUS.GP have been dedicated to developing Asian talent and are now clearly focused on strategically positioning their brands to cover every sector of the industry in order to realise their future mission:

To train highly skilled young sporting and professional talent as part of a programme to develop an Asian Autosport Ecosystem, creating manufacturing, training, media and sponsorship business in the region.

To facilitate this the team focus on four main areas of expertise:

MERITUS have a winning heritage and have developed a platform of key motorsport services:

Dedicated no. 1 mechanics supported by dependable technicians to ensure reliability

MERITUS are passionate about creating international motorsport heroes and the team has been a stepping stone for ten F1 drivers, two Indy 500 winners and two 24H LeMans winners

Since expanding to Asia 25 years ago MERITUS has accumilated 36 FIA Asian titles, winning at every level of the sport under Formula 1 (F4, F3, F2):

Currently promoting, organising and providing all engineering services to the FIA F4SEA Championship, focusing on developing young talent in the industry and creating the next geneartion of International Motorsport Heroes.

After GP2 Asia came to an end and seeing the void left by the Formula BMW Asia Championship, MERITUS decided to organise their own series. AsiaCup was a championship focused on developing young talent in the motorsport industy, giving a start to many young drivers including: 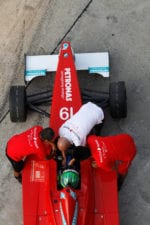 Continuing their winning streak from Formula BMW, MERITUS stepped up to the F3 level Formula Masters, winning multiple races and the 2013 Championship.

As a precursor to competing in the 2013 Formula Masters Championship MERITUS entered the last 2 rounds of the then Formula Pilota China.

MERITUS continued their success in the Formula BMW category in the third incarnation of the championship, the JK Racing Asia Series, after BMW pulled out of Formula racing. The team finished second in the championship after a rule change forced them to split thier 8 drivers across two teams.

Reaching their highest point in 2010 with the GP2 Asia series, MERITUS won the vice-championship, before the series ended and the team refocused on organising championships geared at young driver development. During its time in GP2 Asia the team raced:

The team continued in the renamed Formula BMW Pacific, winning the 2008 and 2009 championships with Ross Jamison and Rio Haryanto. Rio of course went on to become Indonesia’s first F1 driver.

Stepping up a tier to the V6-powered Formula Renault which sat somewhere between F3 and F2, MERITUS won both the 2007 and 2008 Championships.

In their single outing in prehaps the most prestigous endurance race in Malaysia at the time, MERITUS outlasted the competition to take home the gold.

MERITUS targeted Formula BMW which was the premier driver development platform in the mid 2000’s, and matched the team’s passion of creating International Motorsport Heroes. They did just that winning four out of the five seasons with:

MERITUS started their Asian Adventure winning the Formula Asia 2000 Championship in 1996 with Narain Karthikeyan, who went on to become India’s first F1 driver, sparking the team’s passion for working with young talent in the region. MERITUS won the championship 5 times with:

After finding success in single-seaters, MERITUS developed a passion for the category which would define their now thirty year history. Taking their first step up in the category MERITUS entered the 1994 Formula 3000 championship.

After the success of the TMC Costin race programme, MERITUS ventured into the single-seater category and kick-started their championship-winning heritage

At the height of the TMC Costin’s racing fame the project was sold to Don Panoz, creating Panoz Automotive, designer of the cars which won the Indy 500 and 24H LeMans

Seeing the potential of the high-performance Costin, the team decided to go racing and entered every available British and Irish GT Championship, setting tracks ablaze with the first ever Irish Sports Car.

Following the end of the GP2 Asia Series and realising the void left by Formula BMW, MERITUS changed their focus from running teams to organising championships, with the goal of working with youth in the region to develop skills and talent in the industry.

Noting the key issue experienced by all young drivers in the sport, MERITUS created their ‘ONE Concept’ to ensure a cost-effective and equal platform to transition drivers from karting to single seater careers

All engineering services provided by MERITUS.GP

All drivers use the same car, to create an equal field

All races at one track to minimise logistic costs

Everyone pays the same and no-one can buy an advantage

To reach the pinnacle of motorsport!

Utilsing the ONE concept, MERITUS organised the AsiaCup Series, based at the Sepang F1 Circuit. The series utilized the FB02 race car from Formula BMW, which the team had worked with during the previous decade, and engineered it into a reliable machine for transitioning junior karters.

The series ran for three years and trained 70+ drivers; the FIA rewarded this success by upgrading the team to organise Formula 4 South East Asia.

The AsiaCup Series was based at Sepang and transitioned 70+ drivers over 3 years while working with local colleges to develop careers.

Noting the success of AsiaCup the FIA awarded the rights to F4 South East Asia to MERITUS, who adapted the ONE concept to a zone championship.

The team initiated a good thing with their ONE concept and have already found success with many drivers moving on to bigger and better things:

MERITUS started off in Ireland forty years ago, where the first Irish sports car was produced by the Thompson brothers during the 1980’s at their family home.

The TMC Costin was designed by Frank Costin and built by Val, Peter, Sean and Anthony, before the project was sold to Danny Panoz in 1988, creating the now-famous Panoz Automotive.

In 1995 Peter Thompson met with Danny’s father Don, and convinced him to build an endurance car for Le Mans; Panoz went on to win Le Mans and Indy 500 four times as a constructor.

Since then the team has been focused on results on the track, but they have never forgotten their manufacturing roots, working to improve the reliability and performance of the racecars, while partnering with OEM’s in the region to develop specialised motorsport products.

With the success of the team’s championships MERITUS are now looking to become more involved in the production of the next generation of single-seater race cars in Asia.

Winning is business – a business that creates the ideal platform for networking and activating winning partnerships. The team’s sponsorship partners are the driving force behind our success and MERITUS has developed key areas to maximise their ROI:

All races are livestreamed on Facebook with full graphics and commentary, then televised on FOX Sports 3 to 7,728,230 households