SEPANG (Apr 7, 2019) - Frenchman Hadrian David secured his second win of the season-opening FIA Formula 4 SEA Championship with a convincing performance in Race 3 at the Sepang International Circuit this morning.David, winner of Race 1 yesterday, shot ahead in the fourth lap and held on for a comfortable win in a time of 20 minutes 09.336 seconds in the nine-lap race.

Sepang (Apr 6, 2019) - Sweden's Emil Skaras won the rain-interrupted Race 2 of the FIA Formula 4 SEA Championship at the Sepang Circuit this evening.The wet conditions forced the race to be red-flagged on the seventh lap.Skaras, who was fastest in yesterday's official qualifying, clocked 16 minutes 25.820 seconds to claim victory. 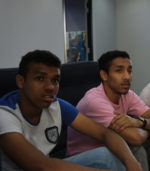