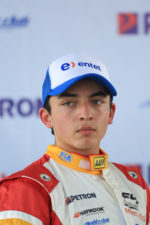 The Fiery Finn Victorious in Malaysia!

Formula 4 SEA – fuelled by Petron – 29 September 2019 Elias Seppanen had a truly fantastic weekend here at the Sepang International Circuit in Malaysia, supporting the Malaysian Championship Series from the 27-29 September.The Finn won three out of four races of the eighth event in the 10-event 40-race 2019 F4 SEA Championship, putting himself in first overall in the weekend ahead of the Malaysian Rocket Muizz Musyaffa.

Seppanen made a comeback chasing for the top spot!

Race 32 put Elias Seppanen back on pole. The Fiery Finn lined up alongside the man who would be his main competition for the championship, Lucca Allen. Seppanen got away well, with Allen hot on his heels while Muizz Musyaffa blocked out the rest of the grid.

Race 31 was back to a standing start and it was a welcome sight to see the pack lined up under the red lights on Sunday morning. Sneha Sharma was on pole in her purple number 9, with the entire grid on slicks in damp conditions.

Race 30 was a rolling start again, continuing the trend from the morning race, but this time with a reverse grid and newcomer John Dizon on pole! John led the pack down into the first corner for the Philippines while Muizz blocked out Elias. Simultaneously Fred and Nico went either side of Sneha squeezing her out while Lucca went all the way around the outside into fourth and Muizz pinched a spot through T2.

Race 29 saw a slight change to the start procedure with the circuit opting for a rolling start after a small issue with the starting lights. The Fiery Finn wasn’t about to let that ruin his day and put his foot to the floor coming out of turn 15, with the sizzling Irishman hot on his heels.

Pino puts his hat in the ring

A Chilean karter, Nino Pino started to test with F4 SEA in April 2019, on a planned career progression to F1. With backing from corporate Chile, Nico participate in Round 8 of the 2019 championship, however had to return to Chile to complete his education and was not able to participate in the final two events of F4 SEA as planned. Nico is a serious and focused potential championship-winning driver.