All the latest news from MERITUS in-house Magazine

BURIRAM (10 May) – Lucca Allen claimed pole position for today’s Race 1 after coming out tops in a tight qualifying session of Event 3 of the FIA Formula 4 SEA Championship – fueled by Petron – at the Buriram Circuit today.The Irish driver posted the fastest time of 1 minute 43.894s in the seventh lap, a close 0.115s ahead of rookie driver Elias Seppanen of Finland who joins Allen on the front grid. Seppanen came in a close second with the best time of 1:44.009s in Lap 4.

Yash Aradhya is one of the most talented Indian drivers of today. Young, professional, focused and with an infectious ability to build engineer confidence around his race craft, Yash's winning talent and ambassadorial skills will project him to the highest levels of the sport. India needs to get behind this up-and-coming racer and support his racing endeavours as he strives to emulate his hero, India's first F1 driver Narain Karthikeyan.

This Thai driver with a catchy name joined Formula 4 South East Asia when the championship visited Buriram International Circuit. With limited testing available, Folky proved his race craft, mainly developed in karting and the Toyota Gazoo Thailand championship. For 2020 Folky plans to step up to race in one of the Porsche Academy classes and is focused on moving to Europe to further his education and motorsport career.

BURIRAM, 9 May – Malaysian drivers Alister Yoong and Muizz Musyaffa, after delivering decent performances in the first two rounds, are strong contenders in Round 3 of the FIA Formula 4 SEA Championship – fueled by Petron - which gets underway in Buriram Circuit, Thailand this weekend.

Josh Smith came out on top this weekend with 81 points, to nab the number one spot from the sizzling Irishman by just 4 points. Allen secured two wins to Josh’s one, but the Australia took pole twice and was also more consistent, taking the fastest lap twice.

SEPANG (21st April 2019) - Australian Josh Smith secured his first victory this season in the FIA Formula 4 SEA Championship - fueled by Petron - when he dominated Race 4 from pole position at the Sepang International Circuit this evening.It was a commanding performance from Smith throughout the nine-lap race which he completed in 20 minutes 19.151 seconds. He led from pole and never faltered as he went on to claim the chequered flag.

SEPANG (21st April 2019) – Irish youngster Lucca Allen took advantage of an excellent start to prevail in Race 3 of the FIA Formula 4 SEA Championship - fueled by Petron - at the Sepang International Circuit this morning. This was Allen's second victory of the weekend after winning Race 1 yesterday.

SEPANG (20th April 2019) - Finland's Elias Seppanen turned in a sizzling performance to battle his way from 12th on the grid to snatch victory in Race 2 of the FIA Formula 4 SEA Championship - fueled by Petron - at the Sepang International Circuit this afternoon.Seppanen, third in the first race this morning, grabbed the lead from Malaysia's Alister Yoong on the second lap and held on to the end to step up on the podium again today.

SEPANG (20th April 2019) – First Irishman claims victory in F4SEA as Lucca Allen takes first podium fresh from the British F4 season - at the Sepang International Circuit today.After settling for second spot thrice in the opening round here two weeks ago, Allen finally topped the podium when he completed the eight-lap race in 20 minutes 03.958 seconds to emerge winner of Race 1 today.

Amer Harris is a championship-winning Malaysian karting specialist, having won many races across all the karting categories including Rotax and IAMI. Amer is a sought-after driver and ambassador for his country. With the support of the Sepang International Circuit he joined the Formula 4 SEA championship in 2019 and impressed the team's engineers with his race craft and professionalism. Without doubt Amer can be a winner in the F4 SEA 2020 championship and a title contender.

Oman’s teenage motor racing sensation Shihab al Habsi is involved in intense preparation as he sets sights on Formula 3 Championship next year. The 16-year-old showed impressively in the Formula 4 Championships in UAE, Spain and South East Asia and is determined to achieve success following his eight years of motorsport experience. 16-year-old Shihab, from Muscat in Oman, must combine his education with his chosen career as he works to find sponsorship support.

Calcutta native Arya Singh is an alumnus of Heritage School and joined the Formula 4 South East Asia series in Malaysia for the second round of the 2019 championship. His first professional car race was in 2016, and in 2019 he contested the MRF MMSC FMSCI Indian National Racing Championship, F 1600 category. Arya's Formula 1 idols are Fernando Alonso and Lewis Hamilton, because they didn’t come from rich families with motorsport backgrounds; instead they worked their way to the top.

Up and coming Indian driver Mira Erda began racing when she was just nine years old and after only 25 days of training she competed in the 2010 JK Tyre National Rotax Max Championship. She's been in the fast lane of Indian motorsports ever since. Her first international race was the Yamaha SL International Challenge in Malaysia where she later contested a few events in the Formula 4 South East Asia single-seaters, winning podiums in the ladies class of the series.

Ryo on the Road to Success

Japanese racer Ryo komikado is a Rookie in every sense of the word. His first foray into motor racing, without any prior karting or racing experience, was with Formula 4 South East Asia which he contested for the past two seasons. Ryo worked hard developing his race craft and the high point of his season was when he eventually earned his first podium. A university student in Tokyo, Ryo is currently racing in Formula 4 Japan.

India's top female racer, 30-year-old Sneha Sharma has put in a consistent performance throughout the 2019 F4 SEA season, finishing in 6th place in Round 9. Employed as a pilot with IndiGo Airlines since 2012, Kolkata-born Sneha is able to fund her own racing activities, with single-seaters being her chosen genre. Prior to contesting F4, Sneha raced karts, touring cars (Volkswagen Polo Cup) and JK Tyre's LBG single-seater category in India.

Alister is strong contender in Round 2 this weekend

SEPANG (15th April 2019) – Judging from his overall performance at last weekend’s opening round of the FIA Formula 4 SEA Championship - fuelled by Petron - Malaysian youngster Alister Yoong is a strong contender for a podium finish in Round 2 at the Sepang International Circuit this week. 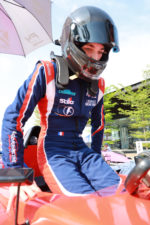 A thrilling start to the 2019 season saw French rookie, Hadrian David, bag three out of four races to come out on top of the event standings with 87 points. Hadrian was denied the perfect weekend in race 2, where he received a penalty for passing the chequered flag twice.

TrackRecord is the team's in-house magazine and keeps you up-to-date with all the latest MERITUS racing news. Have a scroll through the timeline or look at specific championships using the buttons below,